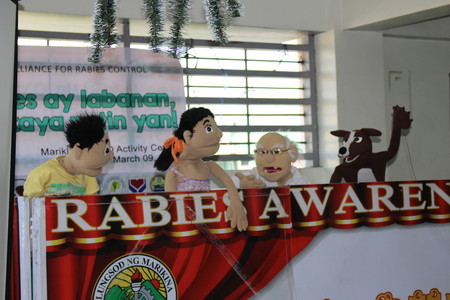 Outcomes:
- The program started at around 9:30 because the children sheltered by the CSWD had to follow their usual routine.
- The children responded positively to the puppet show. Initially, we were worried that the teens will not be interested but they still enjoyed the puppet show.
- The participants also actively participated in the Q&A after the puppet show.
- The main activity for the participants was not conducted simultaneously as initially planned. The game for Group A was conducted first followed by the game for Group B.
- Since the Group A game was conducted inside the activity center, the participants only stayed in their designated area with a facilitator. The facilitator guided/coached them in the tasks per station.
- The Group A participants were slow in answering the multiple choice questions (station 1) and enumerating (station 3) though they were able to answer them correctly. They did well in identifying/explaining the bite prevention photos (station 2)
- The Game for Group B was facilitated by Mr. Cerezo. Not all of the Group B participants joined the game. Only 3 teams with 3 members each were formed. Nevertheless, the teens participated actively in the game and were eager to answer the questions.
- The game show format was effective as a form of evaluation for the participants. Though the amazing race worked as well, the tasks per station still need to be reviewed or improved.
- Tumblers were given to the participants who won in the game.
- T-shirts with rabies message were also given to the participants.