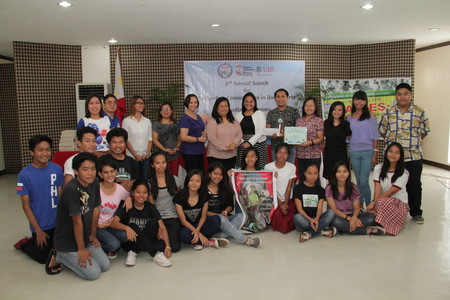 Students with the staff of Ilocos Norte Provincial Veterinary Office during the Folk Media Competition conducted as part of the World Rabies Day celebration in the province.

Points:
• The elimination was collaboration with the Department of Education Ilocos Norte Division represented by Mr. Sherwin Manuel, their division nurse. It was conducted to determine the 4 schools competing and representing the different zones. The elimination was conducted on September 30, 2016 at the Dep-Ed Ilocos Norte Hall with 6 com-peting schools.
• There were originally 4 competing zones with schools clustered based on geographical location (See attached guidelines). However, there was no representative from the North Zone during the elimination contest. Therefore, only three schools were selected to represent the Central Zone, East Zone and South Zone respectively.
• The elimination was conducted not only to choose the representatives per zone but to technically evaluate the dif-ferent presentations. The judges composed of the Provincial Veterinary Office considered the medical and veteri-nary content of the presentations while the judge from the Communications and Media Office considered the lan-guage used and aesthetic appropriateness of the presentations.
• Most of the presentations employed act and theatrical plays on animal bite management incorporating the tradi-tional use of “tandok” and “suma”, importance of proper animal bite management to prevent rabies and rabies-related laws. Florentino Camaquin Integrated School presented a combined act, declamation and musical on re-sponsibilities of dog owners, laws on rabies and animal bite management. Piddig National High School and City of Batac National High School (Poblacion) submitted recorded presentations with responsible pet ownership and im-portance of rabies vaccination in dogs and humans as key ideas.
• The presentations were mostly technically correct. Some of the key ideas identified for correction were rabies vac-cination of biting animal after biting incident, using of human blood sample for rabies test, medical management of bite patients using fast-acting tablets and injectables, death of bite victim after 5-7 days biting incident and trans-mission of rabies through feces and urine. The winning participants were advised accordingly to rectify the misin-formation.
• City of Batac National High School (Poblacion) was the sole participant for the south zone therefore the default rep-resentative for the said zone. The winner and representative for the Central and East Zones were Bacarra National Comprehensive High School and Solsona National High School respectively. The consolation prize supposedly for the 4th competing zone was divided into the non-winners.
• The winners of the elimination competed during the Awarding of Best Implementers on Rabies Prevention and Con-trol on October 7, 2016 at Plaza del Norte, Laoag City

Final Competition (October 7, 2016)
• The three competing zonal winners presented their piece during the awarding of best implementers on rabies pre-vention and control.
• The judges for this activity were Mrs. Rosita Cainggoy from the Communications and Media Office, Ms. Cherry Joy Garma from the Philippine Information Agency and Ms. Florecita Cortero from the Department of Development Communication, College of Agriculture, Food and Sustainable Development, MMSU.
• The competitors inserted some ideas to their pieces as evident in their time utilization. The recorded presentation from CBNHS was integrated into a role-play presentation.
• The presentation from the central zone (BNCHS) was judged as the best presentation with the key ideas on use of traditional practices vs. medical management and adherence and implementation of the municipal ordinance on rabies and responsible pet ownership.
• The presentations were recorded and may be used during information dissemination campaigns by the province.