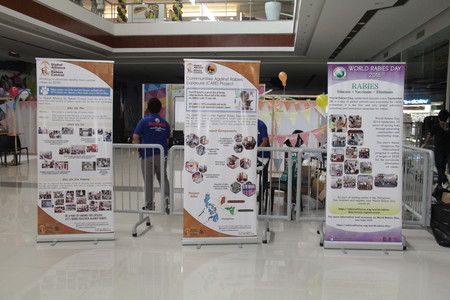 GARC, CARE, and WRD banner tarpaulins during the Children's Festival conducted as part of the World Rabies Day celebration in Ilocos Norte.

Points:
• A total of 148 children and around 160 day care workers and parents from 7 municipalities attended. Most of the children were not part of the pilot areas of ECI therefore have limited knowledge on rabies, respon-sible pet ownership and proper animal bite management.

• A representative day care worker or municipal social welfare officer from the other municipalities and cities were also invited.

• All the day care workers from the municipality of Bacarra were invited as a form of appreciation for their in-itiative and effort to replicate the Early Childhood Integration (ECI) program to all day care schools in their municipality.

• Partner agencies in the event include PVO, PSWDO, Robinsons Place Ilocos and INYO. The The venue, sound system and security was provided for free by the Robinson’s Place Ilocos. PSWDO identified and invited the participants for the activity while GARC, PVO and INYO staff and volunteers prepared the materials, venue and were the facilitators of the activity.

• Dr. Valenzuela and Mrs. Rin gave brief messages during the opening program giving importance to the early childhood integration component of rabies education. This include teaching kids what to do to prevent be-ing bitten, what to do when bitten by rabies-susceptible animals and educating parents and day care work-ers on proper animal bite management.

• To give the children a brief background on rabies and responsible pet ownership, the animated version of the storybook: “Si, Bino, Buboy at Bantay, Magkaibigang Tunay”. Although the video was in Filipino and not in the local dialect, Ilocano, the children were attentive during the film showing. A recap of the video to re-inforce the important information was given by the hosts.

• The Municipal Social Welfare Officers of the seven participating municipalities and cities were given CDs containing the different ECI materials and references.

• There were 7 activity booths for the children namely Photobooth, Shoot the Ball, Dog Mask Coloring, Ring Toss, Leash the Dog, Activity Board and Pet Handling (See attached Activity Proposal). Per municipality, the children experienced and participated in all the activity booths with 5 -10 minutes allocated each booth.

• The children had fun taking turns in playing and participating in some of the booths such as the ring toss, and shoot the ball. All of them were given dog masks to color and bring home as souvenir.

• Special prizes were given to the students per municipality. Take-home loot bags which contain activity books, pencils and comics including freebies stuff from Jollibee were given to all children that participated in the activity. A jigsaw mat was also given per municipality donated by Dr. Loida Valenzuela.

• Also a highlight of the event is the special dance number of Jollibee mascot to end the activity. An oppor-tunity to have their pictures taken with the famous mascot was given to each municipality.