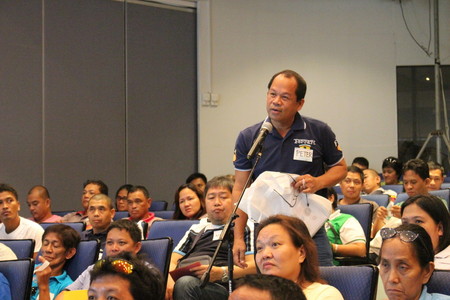 One Health Summit on Rabies and Food Animal Diseases

The activity was conceptualized to serve as a venue for different health professions and local government executives to discuss ground level implementation of the rabies control and elimination program and surveillance of food animal diseases, which are among the pressing concerns of communities at the moment. The Summit also gave an opportunity for the various professions and local executives to share community issues, experiences, and best practices.

Around 302 participants composed of joined the event. The first part was titled ALRAB or ALis RABies (Eliminate Rabies) which followed a talk variety program format. Video clips which are part of the pop culture phenomenon AlDub was shown. Table 1 shows the list of scenarios from the AlDub video clips that served as the storyline for the discussion.

The participants were then asked on what would be the appropriate action considering the situations presented in the video. They were given three colored cards (pink, yellow, and green) which they raised corresponding to their answer. The panelists (Dr. Emelinda Lopez – Rabies Focal Person, DA-BAI; Dr. Enrique Tayag – Bureau of Local Health Director, DOH; Dr. Mary Grace Bustamante – Provincial Veterinarian of Laguna; Dr. Farah Jayne Orsolino – City Veterinarian, San Pablo City, Laguna; and Ms. Marissa Ramilo – Nurse IV, UPLB University Health Service) clarified the participants’ answers and discussed the correct action for the scenario. The participants were also given time to ask additional questions.

The second part was intended mainly for the City/Municipal Health Officers and City/Municipal Veterinary/Agriculture Officers. San Miguel Foods, Inc. Veterinary Services Manager, Dr. Eugene Mende and Dr. Jose Arceo Bautista from the UPLB-College of Agriculture (UPLB-CA) Dairy Products and Technology Division presented updates on the Swine and Cattle Industry, respectively. They also discussed the different diseases in swine and cattle and how it can be avoided. Dr. Romeo E. Sanchez, Jr. from the UPLB-CVM Department of Veterinary Paraclinical Sciences and Dr. Antonio A. Rayos from the UPLB-CA Dairy Products and Technology Division joined the discussion after the presentation as reactors.