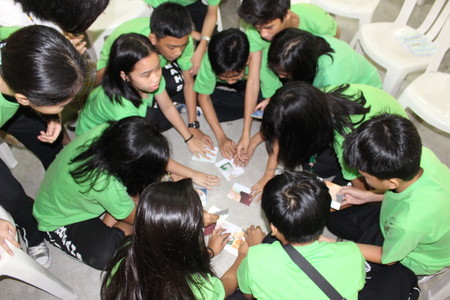 Students of Camp General Emilio Aguinaldo High School (CGEAHS) actively participate in the the group games during the IEC activity of GARC and AFPVD in celebration of Rabies Awareness Month 2016.

The AFP Veterinary Dispensary (AFPVD) also partnered with GARC in the conduct of a rabies IEC activity for Grade 7 students of the Camp General Emilio Aguinaldo High School (CGEAHS). Around 150 students took part in the activity.

Two sessions were conducted to accommodate the number of students and make the activity more manageable. The animated version of the “Si Bino, si Buboy, at si Bantay, Magkakaibigang Tunay” storybook was shown. 1Lt. Maynard Edan from the AFPVD also presented a brief lecture on rabies. This was followed by a series of team games crafted by GARC especially for this age group. For each session, the students were grouped into five teams with 15 members each.

The students from both sessions certainly had a great time during the group activities. They also displayed teamwork and enthusiasm in performing the tasks. For the first activity, they were tasked to put together puzzle pieces showing photos lifted from the storybook. Next was the word search puzzle where they had to answer questions based on the video and lecture then find the words in the puzzle. Last was the quiz bee where a representative from each group had to answer questions based on key messages on rabies, bite prevention and management, and responsible pet ownership. The members of the winning team were given notebooks as prizes while all of them were given comics to take home after the activity.

An IEC activity for military personnel was also conducted in the afternoon. More than 70 military personnel attended the activity which included a lecture and film showing. 1Lt. Carina Flores from AFPVD and GARC Public Health Research Assistant, Ms. Pinky dela Cruz were on hand to clarify the participants’ queries which mostly focused on misconceptions and proper bite management.